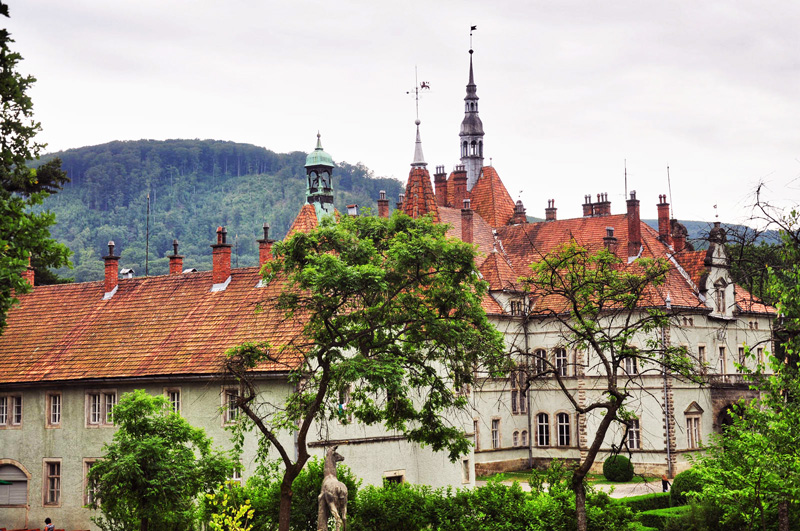 If you want to get into the story, you absolutely must come to the Palace Schoenborn located near Mukachevo in Transcarpathia.

Back in the eighteenth century Count Lothar Friedrich Schönborn, Archbishop maynskyy received from the Austrian emperor in Mukachevo Dominion protectorate, and later his successor has also Chynadiyevskyy. It was perhaps the most neglected region of the Austro-Hungarian Empire. Being the Germans Schönborn actively undertaken to streamline the acquired land. Gardening, beekeeping, viticulture, horticulture, growing the way they are imported for the first time in Transcarpathia, corn, cooking cheese, metallurgy, glass production – this is not a complete list of business areas that have evolved under the patronage of the family. By the way, Schoenborn first drew attention to the healing properties of the local mineral waters and built in Svaliava plant for bottling mineral water ( “Margaret”), which were very popular at the court of Austrian Emperor. Board of six family generations Shenborn turned the land into a thriving. The real ornaments of the region was the castle, built on the site of a hunting lodge in 1890 by Count Burheym Erwin Schoenborn. The building is perfectly blended with the natural landscape. Neo-romantic style building harmoniously combines elements of Gothic and Romanesque style. The architect was considered fashionable in those days an astronomical structure. Shenburniv castle has 365 windows, 52 rooms (as many weeks in the year!), 12 door, on the roof of towering four towers, decorated weathervane.

Although the present palace Shenburniv somewhat disappointing (in 1944 the palace was nationalized, the collection disappeared, eventually there equipped sanatorium “Carpathians”), he continues to please the eye connoisseurs harmony of parts of its exterior, beautiful landscapes, endless avenues park, the lake, which in the initial version had the form of the Austro-Hungarian Empire.

By the way, despite the fact that we invite you to not medieval stone house, and in the almost contemporary architectural and historical masterpiece, have the same “sleeve” mystical and romantic story.

How do without when it comes to the palace ?!

Young handsome Earl Erwin Friedrich Shenburn in Paris met Francis, a woman, which he loved for a lifetime. Back at the palace with beautiful young wife, the count but was not happy. Legend has it that the woman was frivolous and deceitful. Suffering Count perelylysya in aesthetic plane and, unfortunately, now modest interiors of the palace chandelier prykrasylysya as Meluziny mermaid-like creatures known volatile and frivolous and unreliable beautiful and Francis sent back to Paris.

However, the pan-European capital to love at hand, as they say, the ghost of the Countess, annoyed by the fact that its rooms are sanatoriyni chamber, often seen in the corridors of the palace Shenburniv. Do not believe me? Check it out!